I want more from the non-fiction books I’ve been reading. I’ve been left dissatisfied with the last few books that I’ve read and I’ve done it to myself. I want them to be better. I want them to go deeper. I’m taking that frustration out on Sarah. Sarah isn’t the only non-fiction author leaving me feeling this way. She just happens to be the one I was reading when I started this blog last week.

My current process is to read one non-fiction and one fiction book at the same time. If I have not finished them by the time they are due back at the library, I don’t finish them. Only one book has met that fate thus far. It was a self-help book on forgiveness and I’m not sure why I added it to my list. It wasn’t the therapy I need right now so I lost interest in it.

The other part of my plan involves deciding what to read. I started the year wanting to read just fiction. I kept running into an availability issue when picking out a book. I’m a library user and it is a common problem for recently published, popular books. Now I go through my Goodreads list by year and pick out the first non-fiction and fiction book added. I joined Goodreads in 2014 so I have some depth in this regard. I just finished books from the 2015 additions to my reading list and checked out two I added in 2016.

The Wind is Not a River by Brian Payton is a compelling story that takes place during WWII in the Aleutian Islands. It was good, but not great. I didn’t feel connected to the characters but was intrigued by the actual events during which the story took place. The author provided four book references in his Acknowledgements and I’ve added them to my reading list. I want to learn more about the people of the Aleutian Islands and what took place there during WWII. It will be a while before I get to them unless I change my book selection process. 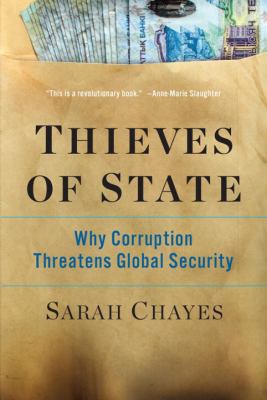 I added Thieves of State by Sarah Chayes to my list after she appeared on The Daily Show with Jon Stewart. The book is about corruption, its impact on forms of government, and aspires to provide solutions. I found the book disappointing and a reflection of what is frustrating me with the non-fiction books I’ve been reading lately. I want more depth. I’m not sure that’s possible in a 300-page book.

She opens strong. The first part of the book was engaging as Sarah reflects on her experiences in Afghanistan and how she came to view corruption as the driving force behind the instability and rise of extremism there. She expands the analysis to other nations in the second part of her book where she describes different models of corruption. The finale is her recommendations for a path forward to reduce corruption.

I found the first part of the book the most compelling to read while hinting at the issue that frustrates me this book. Her writing drew me into her day-to-day and the growing realization that corruption was a way of life for Afghans. I was happy to see her point out her white privilege in dealing with red tape and bribery. I really wanted her to explore this more in the rest of the book, but she never broke through the superficial surface.

Her descriptions of the different corruption models were tedious and I’m not sure my attention was all that great as a result. I honestly couldn’t tell the difference between them. I particularly was interested in her take on Nigeria as I had studied that country in a college political science course. Nothing she wrote about Nigeria sticks out in my mind.

I think this may be a case where she thinks her theory is easy-to-follow, but it doesn’t come across that way. She references PowerPoint charts in the Appendix, but they don’t stand alone and this reader would need to be walked through them more effectively than her written words.

The final section with her recommendations is where I checked out. At this point, I couldn’t get past my frustration with this book. There is a white, Euro-centric preference for a form of government that I just don’t buy into. She presents a case that “The charters — the foundations and origin of modern democracy — were aimed largely at curbing corruption.” She didn’t convince me of that. Although, my view may be skewed by current events here in the United States.

The difficulty I have with a lot of US foreign policy is the same that I have with this book. Democracy is a theory and we don’t even have here in the US, but we go about the world trying to spread the gospel according to Milton, Locke, and the Founding Fathers. We are acting as colonizers in absentia.

She calls out how corruption leads to extremism, but falls back on western models of thought. All governments are corrupt. Where groups of people are involved, corruption exists. We just don’t call it corruption outright, but it remains a systemic part of all our teams, tribes, organizations, and governments. The phrase, “It’s not what you know, but who you know” exists for a reason. We associate corruption with outright bribes while ignoring the subtle financial advantage “knowing someone” provides.

My government pessimism aside there is still the glaring problem of changing people’s behavior that is not addressed in the book. You can change processes and put checks into place, but all that will fail unless you change behaviors. Financial incentives only go so far and come with a healthy dose of irony when fighting corruption.

So we get to my main problem with the book. Did Sarah ever ask a single Afghan what it would take for them to stop participating in the corruption? Stop making the bribes? Stop taking the bribes? That’s the heart of my frustration with Sarah. I never get the sense that she’s involving the point of view of the people she wants to help.

People are the driving force behind any change. This book was sadly devoid of any insight from Afghans, Egyptians, Tunisians, Uzbeks, or Nigerians on how to move away from corruption and extremism in their countries. How do you create a majority culture that not only stops participating in corruption but fights against it becoming the dominant behavior in society? That’s the question that needs answering.